Another interesting and in-depth article by Jeff Thomas-
Gerard 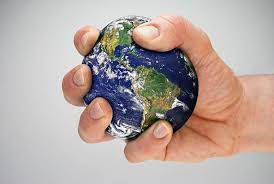 Over the past decade or two, there have been those who have become alarmed at the rapid rise of the globalists.

And yet, the concept of globalism has always existed. There have always been those who sought to control all that was within their perception. Even if that was just a few villages within a valley, those who sought total rule were thinking “globally,” i.e., “I want it all.”

Over the ages, the obsession to control the world led to the creation of empires. Each empire spread over vast areas, eventually growing beyond the ability to control them. Each empire, in turn, collapsed and always for the same reasons.

In the late eighteenth century, Mayer Rothschild, a brilliant banker, came up with a new twist. He focused on currency control, saying, “Let me issue and control a nation’s money, and I care not who writes the laws.”

He accomplished this in his native Germany, then sent his five sons out to achieve the same ends in other countries. His son Nathan created the Bank of England and with the then-recent formation of the United States, created its first central bank.

But success came in 1913 when Rothschild descendants, along with American bankers, created the Federal Reserve. These individuals, plus the leading industrialists, began to dream of the expansion of their powers. They would take over the country’s institutions of higher learning and control the curriculum. They would reshape the medical industry to avoid curative practices in favour of the dispensation of drugs that would keep people permanently dependent on the nascent pharmaceutical industry.

And most importantly, they would take control of political power.

Within a very short time, they conceived of a New World Order – a concept that we today regard as being a secret plan. Yet, from the beginning, the self-anointed Elites were quite proud of their plan. As David Rockefeller wrote in his memoirs, “Some even believe we are a part of a secret cabal working against the best interests of the United States… to build a more integrated global political and economic structure – one world if you will. If that’s the charge, I stand guilty and am proud of it.”

For decades, there have been those who have seen this coming and warned about it. For the most part, they were scorned or laughed at. But that’s changing rapidly. In the last two years, the mask of the globalists has been slipping, and we’ve now reached the stage where the common man is beginning to accept that he’s been conned.

He may not be certain yet whether it’s the politicians on the right or left, or both together, or whether it’s Dr. Fauci, or whether it’s the WEF that’s targeting him, but he understands in his gut that something is fundamentally wrong, and he may have to actually get off the couch and address the problem in some way.

In recent years, he’s been observing his rulers failing to be honest about the pandemic whilst oppressing him with demands that he kowtows to ever-changing restrictions in response to what amounts to a seasonal flu.

He’s watched as massive spending goes to a war that he never signed on to have his country fight. That war has served as an excuse to increase taxation dramatically at a time when he was barely keeping his head above water. If that weren’t enough, he’s watched as the cost of necessities has risen dramatically, whilst his political leaders have assured him that he must simply bite the bullet, as it’s “the price we have to pay.”

In the mix, unemployment has soared, and rather than become more frugal and responsible, his fellow citizens have been encouraged to rely on the government for ever-increasing handouts.

The net result has been an ever-increasing demoralization – the destruction of truth, erosion of the family, and the erasure of morality. Wokeism, sexual mutilation of children, and random acts of violence are becoming commonplace.

The common man can only conclude that those in power are doing everything wrong – that they are failing in all their attempts at “solutions.”

But this is not the case. They are, in fact, succeeding. The problem is that their goals are not his goals. Their goal is globalism under a collectivist rule. Their intent is to collapse the economy, destroy the national moral compass, to destroy any sense of family, truth, and spiritual belief so that the only belief system is in the government.

And they’re doing a bang-up job.

Once these things are lost, and once the average guy is drowning in debt that he can’t repay, the theory is that he’ll welcome a proposal from his leaders that they bail him out, allowing him to have a portion of his life back. All they will ask is that he gives up his property and his freedom. “You’ll own nothing, and you’ll be happy.”

Not surprising, then, if most of those who have seen this coming say to themselves that we’re nearing the point of total takeover.

We’ve been spouting our warnings for decades, largely unheard, and we’re now deep in the process of conversion to totalitarian rule.

But rather than become discouraged, we should pause at this juncture and remind ourselves that this has all happened before. We’re looking at the final stages of empire – a period when the populace lives in fear of their leaders.

The globalists mean to cement their power by collapsing the system, and there can be no doubt that they are going full-tilt in that direction.

They’ve created a war in Ukraine that they cannot win. In so doing, they’re depleting their military resources beyond what can be replaced in a reasonable time, weakening their might. Meanwhile, they’re recklessly threatening action in China as well.

This has driven Russia and China, which are traditional adversaries, into each other’s arms. This is a fatal and arrogant mistake, as the West is no match for them together.

Further, the globalist countries – the US, UK, EU, Canada, Australia, etc. – are on the verge of a debt-driven financial collapse that is now inescapable. Yet they’ve placed sanctions on Russia that have not only opened the doors to massive world trade for Russia, making them stronger than ever. They’ve virtually guaranteed that much of Europe will “freeze to death in the dark” this winter.

From a Western perspective, the prognosis could not be darker, but from the perspective of the Second and Third Worlds, the situation keeps getting better. In talking to people in Asia in particular, the general view is that if they can just stave off conflict with the West for a few more years, the globalists will self-destruct within that time. The West will not cease to exist, but it will become a lesser player.

The question that Westerners should ask, then, is not whether there will be a collapse; that’s baked in the cake.

The questions should be, a) What do I do to avoid becoming a casualty? And b) How do I prepare now to be in a position to thrive after the collapse?

Well, first, there’s a great likelihood that what the globalists will achieve will be the economic collapse of their cabal. They’ve already ceased to be able to produce and provide for themselves and will no doubt slide into a generation or more of collectivist doldrums. Their countries will be less livable, some more so than others.

But that will not mean that the world has come to an end—quite the contrary. The remaining world will blossom and thrive as a result of the vacuum left by the West.

The challenge for those who understand this will be to lift themselves above the fray and plan for the aftermath. It will be a very changed world, but it will be one that’s full of possibilities.