Another insightful and prophetic articles from Geoff Thomas highlighting what may be coming down the line regarding digital currencies and of course the endemic failures and corruption of most governments.

Going the Way of the Denarius 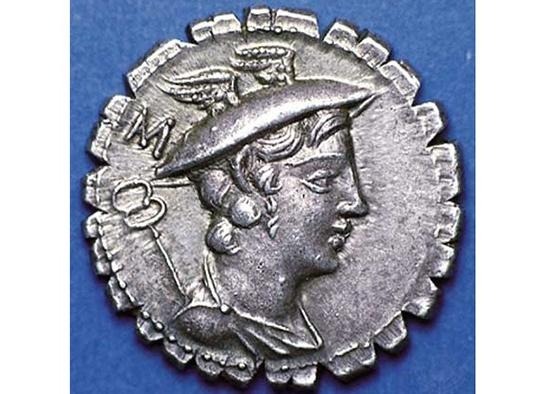 History repeats. (Or it rhymes, depending on your choice of words.)

Throughout history, there has been an extraordinary tendency for governments (and cultures) to follow similar paths. Even regarding eras thousands of years apart, we see people behaving in much the same way, over and over. This is particularly true in the case of “wrong moves.” Over and over, people and their governments make the same mistakes, seemingly never learning from past errors.

Why should this be? In fact, how is this even possible? Surely, if a government in the 21st century were to make egregiously bad decisions, they are unlikely to be the same bad decisions that were made in, say, Rome, in the 4th century.

The reason, in two simple words, is “human nature.” Human nature remains the same throughout time. Two thousand years ago, governments were typically made up of egotistical, self-centred dictatorial types, who were far more concerned with their own power than in the general welfare of their people. Today, politics remains a magnet for such people. They therefore will revert to type when faced with the very same problems.

Should we cut spending to give the taxpayers a break? No, we should increase taxation and give more to ourselves.

If we spend more than we receive in taxes, should we cut back our expenditures, or should we go into debt? We’ll go into debt, and put the debt on the shoulders of the taxpayers.

If the debt grows to be beyond what can ever be repaid, should we cut back expenditures, or should we allow the economy to collapse? Well, we’re sorry to see the economy collapse, but rather than deny ourselves, get out the fiddle and let Rome burn.

The denarius was the coin of the realm during the centuries when Rome was a republic. Although the gold solidus was used as a storage of wealth, the silver denarius was equal in value to a day’s wages for a common labourer and, as such, was more useful as the primary unit of exchange. During this time, it was a stable currency. However, as Rome turned into an empire, all that conquest in foreign lands became extremely costly and it was decided that one way to offset such costs was to devalue the denarius. Each successive emperor added a bit more base metal than the previous one and, by the time of Diocletian, there was no silver in the coin at all, only bronze.

During this same period, Rome experienced dramatic inflation – a predictable outcome when the coin of the realm is degraded. The population was in decline as well.

If this sounds familiar, it should. Modern governments have a tendency to make precisely the same mistakes with regard to currencies. First, empire-building drains the coffers to the point that maintaining a sound economy is no longer possible, then successive “emperors” make the decision to debase the currency in an effort to keep the party going a bit longer.

Of course, “inflating the problem away” never actually works. Just as Rome went into an irreversible decline, so the empire of today is self-destructing, due, in part, to monetary debasement.

So, is the present-day situation identical to fourth-century Rome? Well, not quite. It’s probably safe to say that, had Diocletian figured out that the coin of the realm could be done away with entirely; that is, had he realised he could replace it with paper notes with his picture on them, he might well have done so. Certainly, modern “emperors” have first created redeemable silver certificates, then subsequently supplanted those certificates with notes that were backed by nothing. (At least Diocletian issued bronze coins, whose value, whilst small, was at least real.)

But the modern-day monetary magician has one more rabbit left to pull out of the hat.

Those who believe that the dollar (as well as the euro and other fiat currencies) is on its last legs are inclined to say, “At least, after the collapse of the dollar, there will be no choice but to return to a gold standard. That will put an end to any inflation, plus put the world back on a solid monetary footing.” But this may be wishful thinking.

The U.S. Federal Reserve remains steadfast in its position that precious metals are a barbarous relic. Certainly, from their point of view, this is true. After all, it’s difficult to fiddle with the value of gold, as it retains its intrinsic value. Two thousand years ago, the purchasing power of an ounce of gold was roughly what it is today. And, whilst the average person may prefer the stability of precious metals, governments have a strong dislike for the limitations that this places on them. Governments prefer to be able to fiddle with the value of currency for their own purposes just as the emperors of old did.

What I believe is most likely to occur as the dollar collapses is that the Federal Reserve will “come to the rescue” with a new currency. Not a paper one, that has obvious problems, but one that “solves all the problems of paper currency.” The new currency may well be more of a credit card – to be used for literally all monetary transactions. And the electronic currency will have an added feature (at least from the point of view of the government). Since it’s electronic, every time the user purchases so much as a candy bar, the purchase is registered in the government data centre. No monetary transaction of any kind can be made, except through the use of the card. (This latter requirement will no doubt be justified as being necessary to control terrorism.)

And the electronic dollar may only be the first of its kind. It should not be surprising if other governments see the benefit of an electronic currency as their sole form of currency and create their own.

So, does this mean that precious metals truly may become the barbarous relic, as governments tell us? Not necessarily. After all, many countries have taken a painful hit as a result of the dollar being the world’s default currency. When the dollar crashes, they will take a further hit. They will not want to recreate that problem by allowing the U.S. to simply begin dealing in a new “ultra-fiat” currency.

If, in fact, electronic currency becomes the norm, of one thing we can be sure: The emperors will devalue it, as needed. It will, ultimately, fail and, perhaps sooner, perhaps later, the world will return to the barbarous relic as it has done countless times for the last 5,000 years. The only uncertainty will be when.

Editor’s Note: Wealthy Americans are concerned because the US government is injecting unprecedented amounts of money into the economy.