Doug Casey on the “Graveyard of Empires” 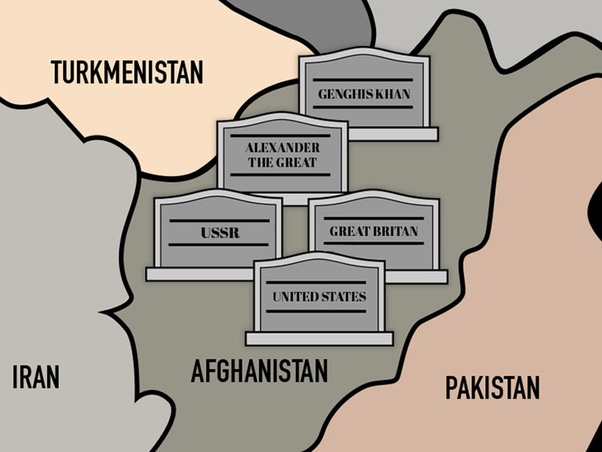 International Man: After almost 20 years, the US government announced it is officially leaving Afghanistan and is pulling its troops out of the country soon.

What’s your take on this? Did the US government accomplish anything?

Doug Casey: The US presence in Afghanistan for 20 years is clinically insane. The place has long been acknowledged as one of the planet’s most isolated, backward, and valueless regions. Its inhabitants belong to disparate groups which are mutually antagonistic. Afghanistan isn’t even a real country. It’s a region.

How stupid are US leaders that—on top of those points—they could learn nothing from the total failure of earlier British and Soviet invasions? Or our own experience in Vietnam?

In Vietnam, a primitive country the US invaded on the pretext of propping up a very corrupt and unpopular government, war hawks said, “We can’t withdraw because it would show that the commies beat us. We have a huge commitment. It’s too hard.” People like myself countered, “It’s not hard at all. Cut your losses. You simply put the soldiers on the boats, you put the boats in reverse, and leave.”

Of course, by the time the US left Vietnam, it was a chaotic emergency evacuation with people being kicked off helicopters from the top of the US Embassy. A desperate run for cover. But that’s the proper fate for invaders, no matter where they’re from. It’s sad in the case of the US, which betrayed its founding principles, however.

Who benefited from the US invasion of Afghanistan?

It was a huge loss for the world in general, the common people in the US and Afghanistan in particular. The only winners were the various members of the military-industrial complex. The generals in the Pentagon, who got to play big shot, build their careers, and rack up brownie points with corporations who will hire them when they retire. Weapons manufacturers and members of the Deep State profit immediately and directly, however. They’re financed by government debt and money printing.

The Afghan adventure served absolutely no useful purpose whatsoever. There were zero benefits to either the US or the natives.

In fact, not only were there zero benefits, but everything was a negative accomplishment. It resulted in the further bankruptcy of the US government and the American people, who are directly and indirectly being taxed to pay for it.

The trillions of new dollars floating around have resulted in massive new layers of corruption everywhere. And considerable new enemies for America—in Afghanistan, in the region, and around the world. The US has earned the contempt of people all over the world, who saw it as a giant bully pushing around primitive tribesmen. It amazes me that anybody tries to defend the US war in Afghanistan on any basis whatsoever. It was a total and absolute net loss.

International Man: The acknowledged and direct financial cost to the US taxpayer of the war in Afghanistan was nearly $1 trillion. The war also killed over 2,300 American soldiers, about 1,000 non-US NATO soldiers, and hundreds of thousands of Afghans.

That is to say nothing of the indirect, delayed, and unacknowledged costs.

What are your thoughts on the costs of this war?

Doug Casey: Direct deaths are just the tiniest tip of the iceberg. Not too many people die in combat today because of body armor, excellent medevac facilities, and medical technology.

For every American soldier that died, there are probably 10 or 20 other soldiers who are severely and permanently maimed in some way. God knows what the numbers are for the psychologically maimed because of what they had to do to others and what was done to them in Afghanistan. The 2,300 dead US soldiers are actually the least part of the damage the war caused. Nobody can even count the Afghans.

The people responsible for this war—prominently George W. Bush and Dick Cheney, but everybody involved in their regime—should be tried for treason. If convicted—which they should be—they should not only serve time in prison but their assets should be confiscated and used to compensate the various victims of the war.

There was an excuse for the Afghan war, starting with the phony reasons given for 9/11. Attacking Afghanistan because of the attack on the Twin Towers was about as logical as it would have been for the US to declare war on China in 1941 because the Japanese bombed Pearl Harbor.

It appears that most of the hijackers were Saudis—assuming that’s what really happened because nobody knows for sure. They certainly had nothing to do with Afghanistan. The Afghan government at the time said, “Act like a civilized country. Show us proof that Osama bin Laden was behind of this, and we’ll render him to you.”

Osama bin Laden said he approved of the attack on the Twin Towers, but he disavowed any responsibility for it. He would have been happy to take credit if he could have. The US invasion was a sham and unprovoked criminal aggression from beginning to end. Osama should have been pursued as a suspect in a crime, and it’s clear the Afghans would have cooperated. When (and if) he was captured in Pakistan in 2011, there was no excuse for executing him on the spot. It was like a mob hit to keep him from testifying.

International Man: Throughout history, many ancient and modern empires have had trouble conquering Afghanistan.

Alexander the Great, Ghengis Khan and the Mongols, various Persian empires, the British Empire, the Soviet Union, and the Americans, among others, all bit off more than they could chew in Afghanistan.

Afghanistan has earned its reputation of being “the graveyard of empires.”

Why do armies have such a hard time subduing Afghanistan? And why, given this obvious history, did the US empire think it would be any different?

Afghanistan is a totally alien culture to Americans. Even now, few can even find it on a map. Before we invaded, few had even heard of the place. It’s a place with totally different values, beliefs, language, religion, and ethnicity from Americans.

What, therefore, are American soldiers doing running around killing natives in Afghanistan?

There’s no excuse for it whatsoever. As I said before, Afghanistan is an unorganized place—in fact, there really is no such thing as “Afghanistan.” It’s a totally artificial construct, with a dozen major tribes and ethnic groups and hundreds of clans. The Afghans’ loyalty is not to their purported government in Kabul or the fictional concept of Afghanistan; it’s to their family, then to their clan, and then to their tribe. It’s impossible to conquer a country like that. The US would have had to conquer every single individual Afghan. With the exception of local quislings and opportunists, the Afghans hate the American invaders about as much as Americans would hate an army of invading Afghans.

There’s no reason why the US war should have gone any differently from the Soviet or the British wars. Insofar as these primitive people are tied together at all, it’s by a belief in a very militaristic religion, Mohammedanism. They take it very seriously and have a visceral hatred for infidel invaders.

But not only is it impossible to conquer a country like that—short of wholesale genocide—there’s no reason to be there. Elements in the US tried to fabricate an excuse that there was $3 trillion of mineral wealth in Afghanistan. Great. There’s probably $3 quadrillion of mineral wealth on Mars. It’s a meaningless number apart from the fact that it’s a fraud that somebody sucked from thin air.

Even if economic deposits of unobtanium exist, the locals will make it impossible for foreigners to mine them. They’ll see it as foreigners stealing their wealth. As I said, the whole Afghan adventure is a criminal fraud from beginning to end.

International Man: With the failure in Afghanistan, is there any doubt that the US empire is on the decline? If so, what are the investment and other implications of that?

Doug Casey: The only thing that really works in the US government now is the military. It’s certainly the only part of the government that Americans still respect or trust. The rest of it is increasingly being acknowledged as completely dysfunctional.

Since the US military is the only thing that works somehow, it’s become the golden hammer in the US government’s arsenal. If all you have is a hammer, then everything looks like a nail. Therefore, I suspect the military will become more important than ever in the years to come.

That’s very dangerous because not many of the military are frontline types anymore. Future wars won’t be fought with divisions, corps, and armies, as things were in World War 2. The actual fighting will be done in small units by special operations guys. There are about 1.5 million individuals in the US Armed Forces. About 70,000 are Spec Ops of one kind or another, which is quite a large number for ultra-elite trained killers, who are reinforced by a million pencil pushers, administrators, and desk jockeys. In addition to the FBI, the CIA, and the NSA, they amount to a modern-day Praetorian Guard. That makes them very dangerous not only to real or imagined foreign enemies but to America itself.

It’s been said that war is the health of the State. Having constant wars, and with combat soldiers in a hundred countries around the world, means the State is getting healthier. It’s very much like what happened with Rome with the late empire. Defending borders against a hundred different tribes over thousands of miles was one cause of its implosion.

The same thing happened with the Athenian empire roughly 700 years earlier. They devolved from the shining city on the hill, freer than and different from any other entity in the world, into just another empire. War, a consequence of empire, destroyed them too. In their case, it was the Peloponnesian War.

The same thing is happening to the US, not just in Afghanistan, Iraq, and Syria, but in dozens of other flyblown shitholes that few Americans have even heard of yet. We’re imitating the Greeks and Romans in the worst possible way.

Editor’s Note: In the months and years ahead the global economic situation will become increasingly volatile.

Before it all unfolds, you’ll need to know how to navigate the complicated political and financial situation.