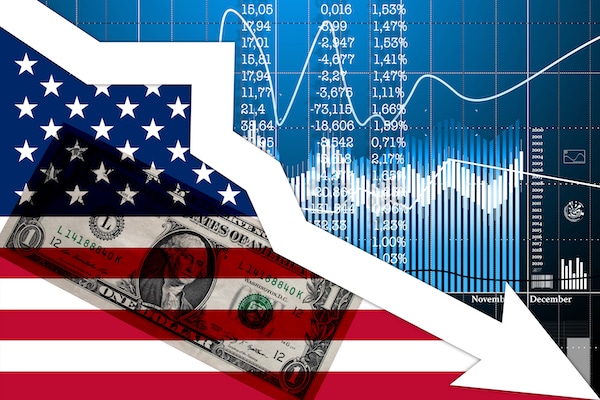 International Man: Whether we like it or not, the reality is, the Federal Reserve has an enormous influence over the dollar and the stock market.

And right now, the Fed has an urgent and fateful decision to make.

It can keep printing trillions of dollars, let inflation skyrocket or tighten monetary policy, and watch the stock market crash.

In other words, it can sacrifice the stock market or the dollar.

David, what do you think the Fed will do, and what are the implications?

David Stockman: Well, I think whether it wants to or not, the Fed will crash the stock market. The Fed has painted itself into a hellacious corner because it’s made such a fetish out of its 2% inflation target, especially since January 2012, when it officially adopted this quantitative target.

In fact, most of the massive money printing, which has occurred since 2012, when the economy was pretty much recovered from the Great Recession anyway, has been justified by an inflation shortfall, which wasn’t true, but that was the justification.

They were trying to raise inflation and therefore felt that they could keep quantitative easing at these huge rates, including $120 billion per month, until recently. And as a result, we’re now in a world in which inflation is heading towards double digits.

Now, when you have double-digit inflation, number one and second, you’re going into what’s going to be a nasty election season in which the Republicans will finally see hope for their salvation in a horrendous battle on the inflation front blaming the Democrats and Biden.

That means the Fed will not be in a position over the next 2, 3, 4 quarters to retreat on the inflation battle. Whether it wants to or not, it will have to raise interest rates even far more than are expected now.

It’s going to begin QT, quantitative tightening, or draining its $9 trillion balance sheet faster than it is talking about at the moment or what the market expects. That’s because it’s not going to be able to justify or maintain any credibility when inflation is running at the CPI level at nearly 10%.

So that’s a new ballgame.

We haven’t been in these kinds of uncharted waters for a long time, not since the 1970s, and even in the 1970s, the story was far different than it is today. So, the market will struggle with a Fed that turns out not to be their friend. It’s going to time and time again, think that the worst is over, buy the dip and make a lot of money, only to be disappointed.

I point out one final kind of analogy here.

If you go back to March 2000, when the dot-com bubble collapsed, the NASDAQ peaked at 4600, and the market dropped by 30% in the next 15 days. And after that bone-rattling drop people said it’s all over. The worst has happened, and you should buy the dip. You’re going to make a lot of money.

I think we’re going to go through the same thing again.

International Man: Suppose the Fed does raise rates aggressively in the months ahead. What are the chances that they will capitulate and reverse course as soon as Wall Street starts screaming about it?

David Stockman: Well, that’s what people expect, but I think this time, they’re not going to capitulate soon and easily. In other words, the so-called Fed put is a lot lower on the S&P 500 index than people may expect or that the Wall Street bulls would like to believe. They think it might be 3,500 or something like that. I think it’s around 2000 because the Fed won’t have the maneuvering room.

Even the official inflation statistics are running high. They are understating the true inflation when you adjust for all the gimmicks they put in the CPI in the last 20 years. But when inflation on the government statistics is running at 7-10%, they’re just not going to have room to start the printing presses again.

International Man: Given the rapidly rising debt levels—corporate, personal, and for the federal government—is it even possible for the Fed to raise interest rates beyond a token amount?

David Stockman: Well, I think you can say it would be dangerous, and yes, the debt levels are really something to behold.

If you take public and private debt today, it’s $88 trillion, which is 370% of GDP. It’s off the charts compared to where a stable economy historically stood. If you go back to 1970, before Nixon pulled the plug on sound money, the ratio was 150%. In other words, we had about $1.5 trillion of total debt and a GDP of $1.0 trillion.

So now we’ve had two extra turns of debt added to the economy over the last 50 years. Two turns of additional debt amount to $50 trillion today, burdening all sectors of the economy, households, non-financial business, governments especially, and even financial institutions, than would be the case had we stuck to kind of that golden mean of 150% debt to GDP. That’s the leverage ratio of the national economy that prevailed for a century up to 1970.

So yes, there is a massive problem with this enormous debt burden. When the Fed raises interest rates, it will notch up the carry cost and service cost enormously, creating all kinds of dislocations in households that will have to pay more for their mortgages and their other debt.

As interest rates go up, all that money corporations borrowed to buy back stock and pay dividends that weren’t being earned will result in larger interest expenses and lower profits.

So the whole thing will be a pretty big mess, but that will not stop the Fed from using the only tool it has.

It has one tool. It’s like the craftsman with a hammer, and everything looks like a nail. So if the Fed wants to accomplish something, it will have to hit the nail.

So the Fed will have to raise interest rates, not just a 2% by the end of this year or 2.5%. They’re going to have to go up into the 4-6% range to slow down the economy and break the back of inflation.

I was around when Volcker took interest rates to 20% on the overnight rate to finally break the back of inflation. But, of course, that will cause a lot of damage to the economy. But I don’t think they have much choice.

In short, you’re going to have one difficult time bringing inflation under control, and the consequences of those moves will be mind-boggling and historic in terms of their negative impact.

International Man: Given everything we’ve talked about today, what can the average person do? What can they do to protect themselves and profit from what is coming next?

David Stockman: Well, I think the most important thing is to stay out of the casino.

The bond market is vastly, massively overvalued. As a result, the price of bonds will drop dramatically, and people will be shocked by how much you can lose in allegedly safe sovereign debt.

The stock market is even more dangerous, and it’s entirely because of these artificially low, ultra-low interest rates. So now we’re starting to move into the realm of reality, let’s say normalcy, as interest rates come back up. And I think they got a long way yet to go.

If you’re going to be in the stock market, be on the short side.

But if you don’t have discretionary capital or savings, and if you don’t have the stomach for what will be a very volatile ride, the best thing to do is stay in cash, even though you’re losing ground against inflation. At least bank accounts are not going to lose principle. Whereas bonds and stocks can lose 30%, 40%, 50%, 60% of their value in the next year or two as we go through this great correction.

International Man: We are facing a severe and imminent crisis on multiple fronts. That puts a premium on acting before it’s too late, and you need to act quickly.

Events are unfolding rapidly, and the window of opportunity is closing. The sooner you position yourself for protection and profit, the better.